Klopp Gets A New Insignia Upon Joining Liverpool

Any football fans amongst you willl be aware that Jurgen Klop has been appointed as the Liverpool Football Club Manager, what you might not be aware pf however is the fact thatVauxhall are the ‘Official UK Car Partner’ of Liverpool Football Club. Therefore as a welcome gift Vauxhall are giving Klopp the brands flagship model, the Vauxhall Insignia. You might think this isn’t worthy of new, but it is quite interesting to know how much the Opel/Vauxhall brand attribute to such marketing schemes. Furthermore Klopp has a long running relationship with the brand, for example this isn’t the first time Klopp has drove an Insignia, he had the Opel equivalent back with his old club, which has lead to Opel using the sign off: ‘Jürgen Klopp changes his club but not his company car’ and ‘You’ll never drive alone’. 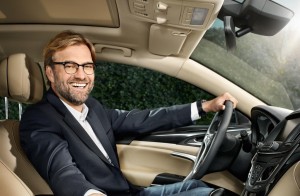 We were unaware, but apparently Klopp is somewhat of a trademark ambassador for the Opel/Vauxhall brand, and they have even attributed the companies 35% sales boost in 2014 to Jurgen Klopp! Obviously then if you want someone to endorse your brand, try and get Klopp to do it!  We imagine they will have given Klopp a pretty well spec’d out version of the Insignia, which costs between £16,829 and £30,129, second hand Vauxhall Insignia deals might be a more attractive option to those of you who are on a budget, and don’t have the marketing power of the new Liverpool manager. You might expect the manager of a football club to drive something a bit more flashy than a Vauxhall Insignia, but the Insignia is actually a really nice luxurious car. Its certainly better than my first company car, which was a Volvo S70.